Montecarlo September 2017
"Art for All"

Excerpt from the International Press:

“Great success of the artist Cesare Catania during the last exhibition in Montecarlo: the first work of art for color blind people was presented. Art is for Everyone…”

The work for colorblind people “The mouth of Etna- E Version” by Cesare Catania was presented for the first time worldwide from 28 to 30 September 2017 during the Boat Show in Montecarlo, within the event “Top Marques Watches 2017 “, in the” Belle Epoque “exhibition hall of the Hermitage Hotel.

Some editors have even compared him to one of the Renaissance Masters because of his transversal approach to the art world; eclectic engineer on one side and multifaceted artist on the other.

Cesare Catania expresses his genius through sculptures and paintings that embrace the concepts of hermeticism and cubism, whose visual results are enhanced thanks to the artist’s studies in mathematics and engineering.

Last week during the Monegasque event, the Italian artist presented for the first time a unique work of its kind.

“With this work, I wanted to try to overcome the visual barriers that force people with Dalton syndrome to see a reality different from the common one, but not less attractive.” So explains the Italian artist referring to what inspired him during the realization of his latest sculpture in silicone and steel.

And this is how work number 57 entitled “La Bocca dell’ Etna – E Version” was created and conceived by Cesare Catania, precisely to emphasize the visual characteristics of people with Dalton syndrome. For the first time in contemporary art, the artist enhances his work by shaping it on the visual spectrum of color blind people (more than 300 million worldwide).

“Vicent Van Gogh himself, an undisputed master in the use of color, was color blind.” continues to explain Catania. “Honestly, I don’t see color blindness as a defect: I would call it a feature more. There is nothing more fascinating than thinking about your own work of art that changes color depending on the point of view from which you observe it. Andy Warhol had experimented with his Marilyn Monroe how, despite changing the color palette, the icon of the American myth remained unchanged. “

Catania’s work was presented for the first time worldwide in a hot week of events for the Principality of Monaco, which also hosted the Boat Show (the most important international yacht and boat luxury fair) millionaires) and the Gala dinner with Prince Albert of Monaco and Leonardo di Caprio.

Cesare Catania concludes: “The phrase” ART FOR EVERYONE “has a double meaning for me:” Art must be addressed to the whole world “and” Art must be considered as such by anyone who observes it “.

Cesare Catania does not limit the use of his works: “regardless of one’s cultural, social or even physiological filters. If each of us saw the colors of the world in our own way we would live in a world without prejudices…. »

On the opening gala of the event, Cesare Catania also donated one of his works of art to the charity association Power Disease. “

some of the artworks on display

find out all about Cesare Catania's exhibitions and his artistic events

Extract from the Book
"Art for Everyone" (Monaco 2017)

On the occasion of the exhibition at the Hermitage in Montecarlo (September 2017), the artist Cesare Catania presents for the first time a work of art whose color palette is studied on the visual spectrum of those affected by Dalton syndrome (color blind people).

Below an extract from the book: 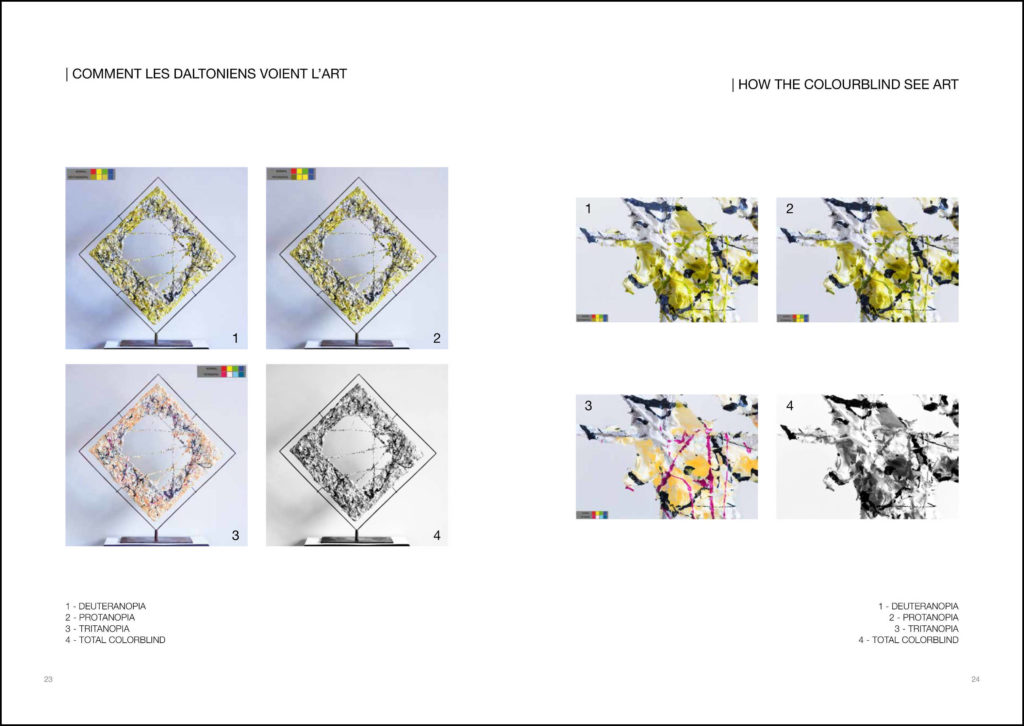 ... and now
discover all the other artworks made by the contemporary artist
Cesare Catania ...

BACK TO THE MAIN PORTFOLIO

or directly enter the specific artworks' categories here below
and discover now other works of art made by the artist Cesare Catania:
paintings oil and acrylic on canvas,
3D paintings,
sculptures,
tapestries,
sketches,
ingenuity works (including monumental sculpture and artistic architecture)

... and if you would like to know everything about his
"most popular artworks"
scroll the slider here below ...

Artwork Title: “Harlequin in the Land of Giants”
“... hyperrealism and surrealism ...”
Read more

Artwork Title: “The Man Who Does Not See”
“... the man is immersed in the society around him blindfolded ...”
Read more

Artwork Title: “The Mouth of Etna – E Version”
“... passion for colours, for energy and for contemporary sculpture ...”
Read more

Artwork Title: “The Embrace – B Version”
“... everything starts from an embrace …”
Read more

Artwork Title: “Flamingos at the Mirror”
“... the metaphor of human being ...”
Read more

or come back to the main menu

Enter and discover the Biography of the Artist Cesare Catania: everything about his life, his inspirations and his personal history.

In this area you will find all the details on the books of art written by the Artist and the Author Cesare Catania.

The Art of Cesare Catania has never been so alive!
Enter and discover his videos and his tutorials.

What does the international press tell about the Artist and his Art?

Browse the complete catalogues of his main works of art.

One of the largest nonprofit arts centers in the US; devoted to today’s most experimental, thought-provoking art. Founded in 1971. Part of MoMA since 2000.

🐵🐙🐰🐻 The whole crew looking cute at the Zoom function. Heads up, our Online AF Benefit on Wednesday is VERY close to capacity! RSVP at http://mo.ma/zoom

All of us are definitely "blind" in front of this new situation.... 🎨🎨🎨🎨🎨 #cesarecatania #art #contemporaryart @Grupodobemestar

Frank Lloyd Wright’s masterpiece is a UNESCO World Heritage Site. Engage with the Guggenheim’s iconic art and architecture no matter where you are. 👇

#WorkoftheWeek: "Felix Gonzalez-Torres was the most generous of artists, creating work that gave of itself to the public with the possibility of being endlessly regenerated."

The Museum of Contemporary Art

Tate galleries are closed until further notice due to coronavirus. More info: https://t.co/VMGfiSysxJ We look forward to welcoming you back when we re-open 💛

📢 Announced today: Tate Britain will be awarding one-off bursaries of £10,000 to 10 artists in place of this year’s #TurnerPrize to help support a greater selection of artists through this challenging time: https://bit.ly/3gnkYFx

Any cookies that may not be particularly necessary for the website to function and is used specifically to collect user personal data via analytics, ads, other embedded contents are termed as non-necessary cookies. It is mandatory to procure user consent prior to running these cookies on your website.