Technique: Oil with spatula and acrylic on canvas 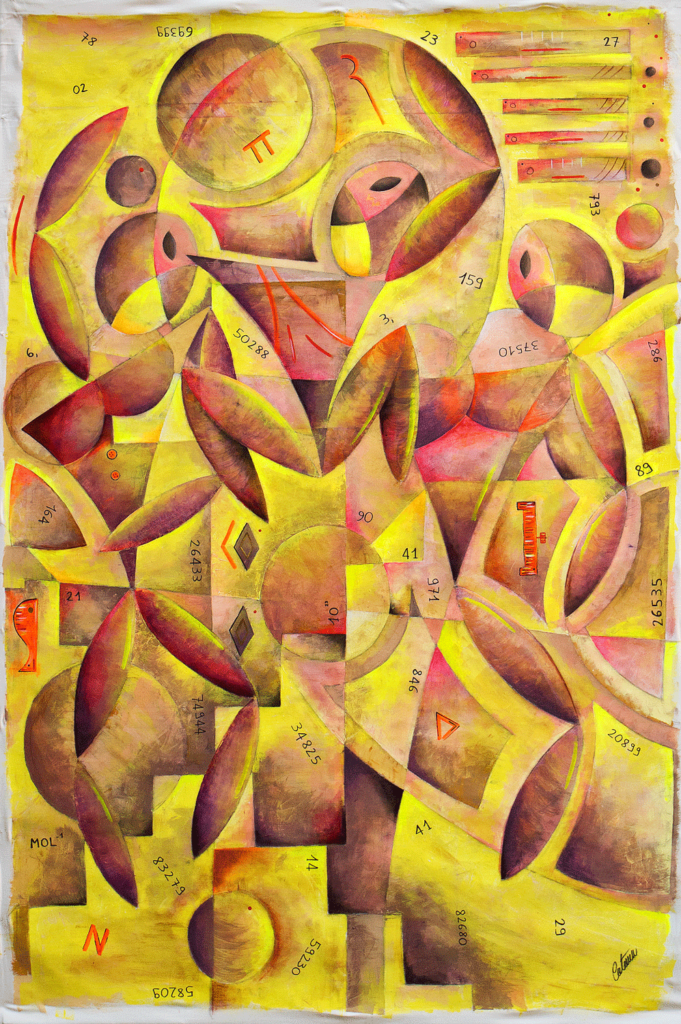 Cesare Catania’s “The Three Men” is an aesthetically engaging work of art and at the same time full of meanings. Realized with a mixed oil tecnique on canvas, the painting wants to embrace all the knowledge from the ancient Greeks to today.

The man on the left is Amedeo Avogadro (18th century), belonging to the electricity of Enlightenment and known for the eponymous constant N which defines the relationship between the number of atoms necessary to form a mass of substance equal to the atomic weight. The revolution of this discovery consisted in being able for the first time to report to the macroscopic world of “grams”, hitherto well known and defined, with that microscopic “of atoms”. Avogadro constant is equal to 6.02214129 … x 10exp23 MOLexp (-1) and is precisely with these scattered numbers around the canvas that the artist pays a tribute to the Italian scientist.

Cesare Catania paints Pythagoras in the central part of the painting. Pythagoras is bouncing a sphere and he the first scholar according to the classical literature that was able to overcome precisely the barriers between the straight and curved world, defining the PI quantity as a constant that binds in each circle the ratio between the measurement of the circumference and the diameter. Pythagoras is for the contemporary painter the reference point of all the ancient science and for this reason that the artist pays a tribute to the ancient philosopher with the numbers of the constant 3,14 ……

The man on the right in the painting is Heisenberg, the cornerstone of quantum mechanics that defines the boundaries of the knowledge of conjugate physical quantities. Heisenberg becomes for Cesare Catania the man that marks the break regarding the previous scholars of classical mechanics. According to Heisenberg (1927) in fact it’s not possible to know of a particle in a precise manner and at the same time the value of the position on one side and on the other side speed, magnitudes precisely between them are conjugate.

The more one tries to reduce the uncertainty of a quantity (for example the position) the more it increases the uncertainty on the conjugated quantity (for example the speed). The tribute to the ‘900 scientist is given by Cesare Catania with representation on “The Three Men” tapestry of a stylized microscope and with the Greek letter “delta”, commonly used in physics and mathematics to express the changes in quantity.
In this work of art the author clearly expresses his passion for the pictorial and engineering arts.

Gn and have a nice Sunday 💤😴

Born on this day in Fulton, Missouri, Cave has become internationally celebrated for his elaborate installations and textile works which blend sculpture, costume design, and instrument-making.

🌱 Join us on 14 February to hear from three artists - Soraia Samju, Eduardo Padilha & Davinia-Ann Robinson - on how they make and develop their own materials, inspired by @vicunacec's #BrainForestQuipu at Tate Modern. Find out more, and book tickets here: https://bit.ly/3YicZOY

Visit #FondazionePrada #Milano during the weekend to discover #Atlas, the permanent project that hosts installations, paintings and sculptures in a sequence of environments incorporating solos and confrontations