Art of Informal. The inauguration of Cesare Catania’s personal exhibition in Monaco Montecarlo astonishes by the character of the artworks and the number of art lovers attending.

On Thursday, 27th September, in the magnificent exhibition rooms of hotel Meridien Beach Plaza Hotel in Monte Carlo, took place the vernissage and opening party of the personal exhibition of the artist, which will remain open to the public until 15th January 2019.

This personal exhibition of 18 works of art has moved the public by the intensity of both the pictures and sculptures. Among others, the tapestry painted with oil on canvas entitled “The Embrace” is featured, a masterpiece that represents, in a strict sense, the embrace between a man and a woman and, in an enlarged sense, the embrace between two people of two different colors. This tapestry has already a story… Indeed, among other exhibitions, it was also selected to represent art and “made in Italy” during the Italian culture week in 2016 in Switzerland, an international event organized under the high patronage of the President of the Italian Republic. The only “Self-Portrait” created until now by artist Cesare Catania is also presented for the first time.

The painting-sculpture entitled “ReArt”, already exhibited in 2017 at the contemporary art museum in Milan “la Fabbrica del Vapore”, also forms part of the exhibition, along with two unique pieces from the famous “The Mouth of Etna” series, the well-known sculptures in silicone, acrylic and steel. Among the 18 presented pieces, feature as well the sculpture entitled “The Heart of the Earth”, made of marble powder and fragments of a meteorite, the picture painted with oil on canvas “Gospel”, already exhibited during the biennale of Monte Carlo in 2016, two different versions in acrylic and silicone of “The Cutting”, “Harlequin in the Land of Giants”, “Flamingos in the Mirror”, so… a number of unique works of art, resulting from the equally unique techniques and inspirations of the artist.

The event, placed under the sign of elegance and culture, was attended by more than 200 very select guests, among which many prominent personalities of the Monegasque world and international audience, including: Cristiano Gallo (Italian ambassador to the Principality of Monaco), Madame Regine Vardon-West (President of association Amitie sans Frontieres), Anastasiya Vrublevskaya, Mr Nicolas A. Hesse, members of the Bentley Club of Monte Carlo and of exclusive Club 39, representatives of the Princess Charlene Foundation, as well as well-known art collectors and dozens of distinguished guests from the world of high international finance and private banking. 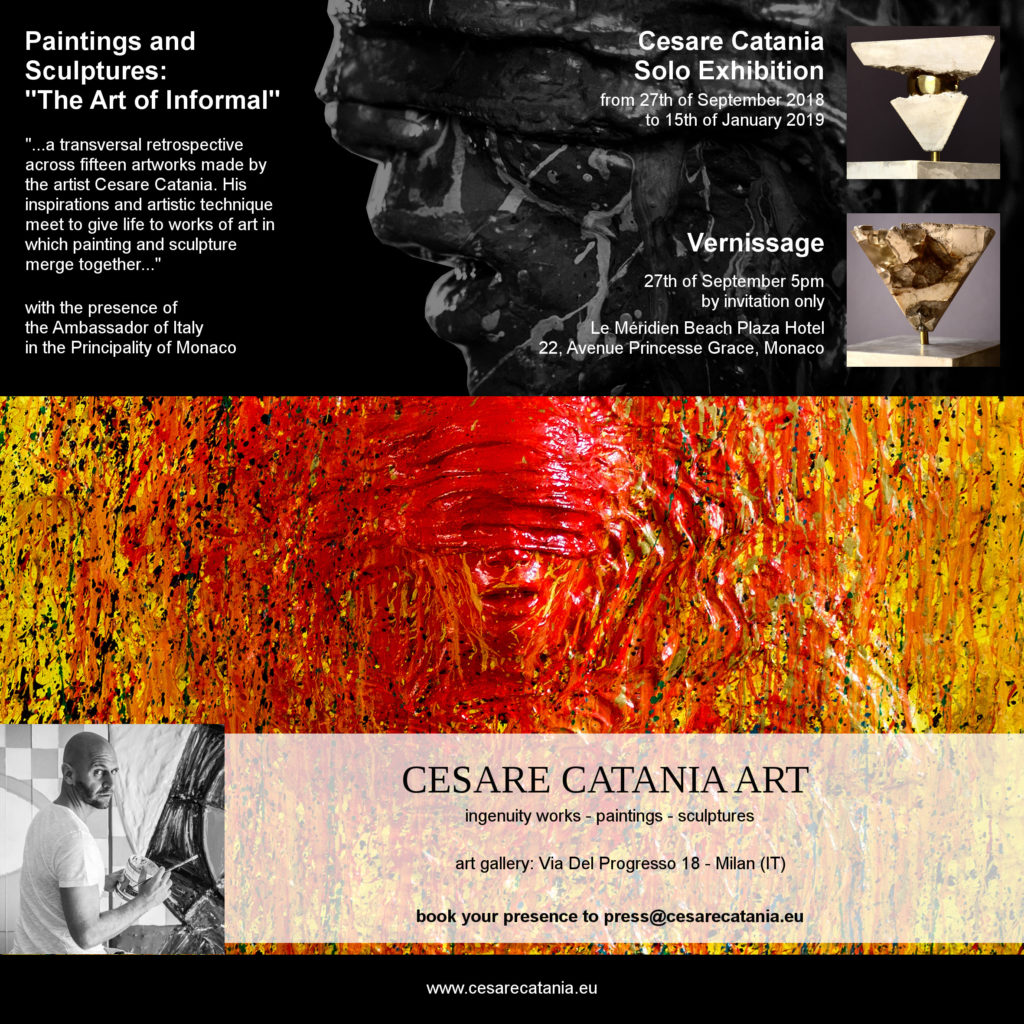 Video of Party and Vernissage:

The art of the informal by Cesare Catania

A site of experimentation for over 40 years, MoMA PS1 champions artists at the intersection of the social, cultural, and political issues of our time.

Mina Stone, Chef and owner of Mina's café at #MoMAPS1, chatted with us today about her newly published cookbook "Lemon, Love & Olive Oil" 🍋💙🍋💙. Watch our Instagram Story to find out the inspiration behind the cookbook & more: https://mo.ma/Minas

Cesare Catania @cesare_catania is a great artist that speaks about the relationship about Art and Architecture.
You can see more at http://ww.redivory.org
.
.
.
#cesarecatania #art #argallery #artist #artistsoninstagram… https://www.instagram.com/p/CC1Zl1RIW6y/?igshid=1vw6zzj74ynwx

The Gugg ❤️ You. Immerse yourself in video, film, and performance in our spiraling rotunda this summer. Learn about our safety measures. 👇

Today’s #FrankLloydWrightFridays illustration is by Katie Woodward—“I always love visiting the Guggenheim, the building is so unique! Its curved sides also make it a fun challenge to sketch, both inside and out.”

“When I fell in love with black it contained all color. Because black encompasses all colors… You can be quiet and it contains the whole thing.”

Happy birthday #LouiseNevelson whose Sky Cathedral/Southern Mountain is now on view at MOCA!

Tate is open! We can’t wait for you to see our newest exhibitions & your favourite artworks. Book tickets today. 🎟️💛

'All the work I have done, you could say, is a celebration.'

Sirkka-Liisa Konttinen's nostalgic series 'Byker' captures the spirit of Byker, in Newcastle. She moved to the city in 1969 and has photographed the streets and the residents ever since.

“Images that can be interpreted and have meaning are bad images.”